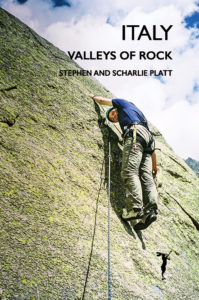 In the summer of 2004 we went climbing with Dimitri in Italy in the Valle Garrafano in the Apuane Alps, a limestone area famous for its Carrara marble, north of Lucca in Tuscany.  Dimitri had been a tenant of ours in Cambridge when he had a sabbatical working in the University Library.  We had been climbing together in the Lake District. He was now married to another climber, Teresa.

We returned the following summer and were whisked off again to the rocky valleys of Italy’s far northwest in Dimitri’s yellow Kangoo van. We climbed in the Valle Maira and Valle Gesso in Piedmont in the Maritime Alps, just across the border from the Parco National du Mercantour in France. Then we drove further north to the Valle dell’Orco in the Graian Alps near the Parco Gran Paradiso, near were we had gone walking with our children in 1986. 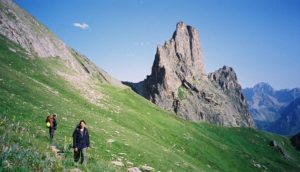 The rock in these northern valleys was superb gneiss and granite and the climbs fairly long delightful routes at about English VS grade 4c. He has a large group of climbing friends in Florence and is something of a ‘pied piper’ and they look to him to decide where to go and what things to climb. With us Dimitri chose well and we managed to climb half a dozen or so fantastic routes.

This was the last time we went climbing with the ‘Pied Piper’ Dimitri.