Guatemala – Our Man in Central America 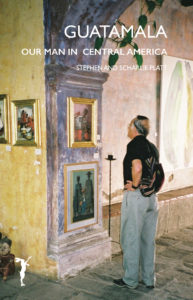 We went to Guatemala to visit David, a friend I hadn’t seen for more than twenty-five years since I lived in Venezuela. We stay with his delightful family’ 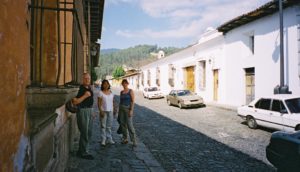 We go to Chichicastenango on market day and witness the strangely pagan firework procession from the church; we take a cruise around Lake Atitlan and stop off in the villages around its shores and watch people by the side of the lake raking coffee beans and sorting onions. 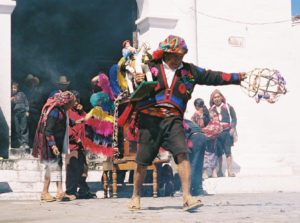 We fly to Tikal, climb pyramids and hear about the end of the world – the Mayan end of the fourth b’k’tun on 21 December 2012. 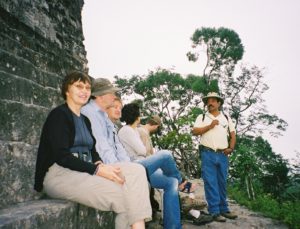 Atop Temple IV Tikal, Juan our guide explains the Mayan calendar and that the current age of maize that has lasted 5200 years will end on 21st December 2012

David takes us up the active volcano of Pacaya where we brave poisonous sulphur clouds and risk being bombarded with tephra bombs that David says land with a splat like red-hot cow pats. 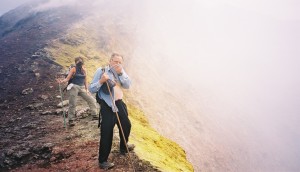 But the most amazing part of our trip, something we hadn’t bargained for, is that David reveals he was for over thirty years ‘our man in Central America’. He has lived a secret double life for fifty years and, apart from his immediate family, has never told anyone. We spend hours talking about our shared history, we were both brought up in Liverpool and both went climbing as youngsters in North Wales. And we reminisce about our time in Venezuela climbing tepui and try to get to the bottom of Latin American psyche. 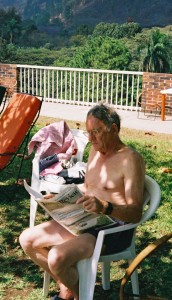 David reading London review of Books by the pool in the golf club at Lake Amatitlan, Guatemala

How did you come to be in Guatemala? asks Scharlie. Because of Belize, David says. I came in 1969 when Guatemala was making noises about invading. I was trying to find out the battle plan.

It seems such an odd thing to say that we ask who sent him. He hesitates. It’s twelve years since I finished so it shouldn’t matter to tell you. I wasn’t a journalist, I was working for MI6.

We’re stunned. It seems such a bizarre idea, this quiet gentle man a spy. So we just look at each other and say nothing.

We stop at the plumbers’ supplies and find out that he has overscrewed the stopcock in the road. It upsets him and makes him abstracted. Later at home Tomi says, it’s stress. She gives him a massage – chopping his neck helps, she says. She is quite robust, saying it couldn’t be fatal as he’s she’s done it for 20 years and he’s still here. She describes how he sometimes cries out with frustration. I could cure it with three shots of rum, says David. I used to struggle to a bar and with each drink I’d feel better. But I’m an alcoholic so drink’s no remedy. This is David’s third family. It’s the only one I’ve stayed with long enough to see them grow up, he says.

He must have been in his fifties when he met Tomi. She was nineteen, he says. We were both at low ebb and decided to join forces for a while. He helps Jenny with her homework and encourages her English. He’s proud of both his daughters but is concerned about their future. When I pop off, he says, I’d like to know they are alright, he says.

David is hard to describe. One’s first impression is of a gentle old man with thick glasses, grey hair and precise, almost fastidious, movements. He has quiet, slightly slurred, speech and he often illustrates his points with physical movements like a squirrel eating a nut. Instead of words he often uses little mimicking pantomimes that are funny and to the point. He stands erect in his slippers, shoulders back and hands clasped like a ballet dancer over his stomach. His eyes crease with fun and mischief. When he let drop that he had been an MI6 agent for over thirty years it was at both ridiculous and entirely believable. Now at 75 years his eye for detail and his ability to savour life is still giving him an energy which is infectious.

Hard to imagine this Pickwickian character, as our man in the Caribbean. A real-life James Bond; blinking over the top of his glasses. Solicitous of our creature comforts; gentle and loving with his daughters. Yesterday he rather diffidently showed us the shoulder bag in which he carries his pistol. We’d been talking about climbing the volcano Pacaya that you can see from his veranda and he plans on taking the pistol for protection. You can’t draw on someone holding a gun on you, he says. When they ask for the money I just put my hand in here as if I’m getting out my wallet. It’s a tourist bag and they’ll never guess that I have a pistol. And then I point and shoot through the bag.

The bag rattles. That’s the ammo, says David. It’s not like the telly, not how they do it in the movies, with two hands on the gun pointing it up. You may need a hand to steady yourself if you’re moving round a house. And when you bring the pistol down to fire it’s in your line of sight hiding the target. No, you use one hand and always bring the pistol up from below, arms straight, both eyes open. They trained you? Yes, we began with all that. Weeks in what we called the fortress in a place on the coast.

For 40 years I’ve pondered what is wrong with this place, says David. Guatemala? we ask. No, Latin-America, the whole lot. Maybe it’s a defective gene. It’s the Spanish character, Cervantes wrote about it. The Hidalgo with a toothpick in his hat as You, yourself. Then family; maybe one’s extended family. Never society or your fellow man. I can’t abide the arrogance, the idleness of the elite, the wastrel landowner with thousands of acres. Some words are black – honour, righteousness, says David.

What proportion of population is Maya? Over half. Two per cent are white and they have everything. And the rest, are mixed, ladino or mestizo. Commentators suggest we’re all ladino now. But that’s not true. The majority are pure Maya, and they have nothing. But they’re getting organised. There are people helping them, showing them what to do, what to demand. Three thousand years of culture and still going strong. This division is what’s wrong with this country, says David. I can’t stand the rich Criollo – their arrogance, their lack of sympathy, their racial intolerance.