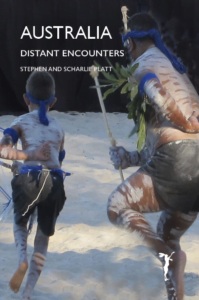 Australia is far-flung and until the airplane overcame the tyranny of distance Australia was terra incognita, cut off from the rest of the world for millennia and even after European colonisation, took many months to reach by sailing ship.

The Aboriginal people of Australia are one of the oldest living peoples of the world having occupied the same territory continuously longer than any other human population, about 50,000 years. Aboriginals believe that their ancestors brought the world into being by naming the features of the landscape and the creatures that inhabit it. They sing to keep the land alive and their songs are both dreaming tracks that tell stories of ancestor figures and a GPS to help guide them over vast distances. Australia was first ‘discovered’ by Dutch explorers in 1606 and the First Fleet of convicts was sent out from England in 1783. Free settlers began colonising soon after.

In Perth we visited Scharlie’s brother Hyung Shik, who had been adopted as a young man by her parents. We swam various times in the shark-infested waters of infamous Cottesloe beach where we also attended the 60th Perth International Arts Festival with a dawn-dusk opening that aimed to reconcile the Nyungar guardians of Mudurup Rocks at Cottesloe with modern Australia.

In Melbourne we visited friends from college days and stayed in their house on the Mornington Peninsula where we saw kangaroo and Napoleon’s death mask, but failed to see Koala bear. We had met Andrew on the plane from Singapore and he introduced us to the National Gallery in Melbourne where he is a Trustee and showed us the recently acquired Correggio Madona and Child.

And finally we got to Sydney and were treated to a spectacular exhibition of Aboriginal art and dance depicting places along the Canning Stock Route in Western Australia but we missed a visit to the Opera House and ferry rides across the harbour because of a mix-up with the flights. 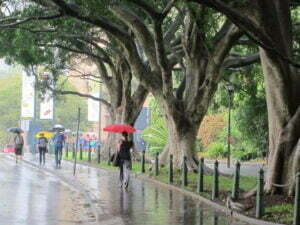