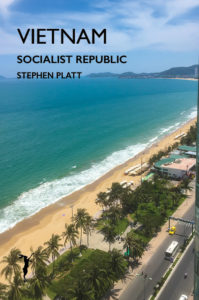 This journal is about a job for the World Bank to report on recovery needs after Typhoon Damrey in November 2017. My task was housing reconstruction. Other people on the team reported on transport, irrigation, agriculture, fisheries and economic development. Our report entitled 2017 Vietnam Post-Typhoon Damrey Rapid Damage and Needs Assessment was published in July 2018.

Unfortunately I pulled a calf muscle at dawn on day one running along Nha Trang beach, as shown in the photo, so I didn’t see as much of Vietnam as I would have liked. Nevertheless we did go north up the coast and inland to the highlands to see the effect of the storm and progress in recovery.  Not surprsingly considering what they have been through, the Vietnamese seem exceptionally resistant and resourceful.  Over 100,000 houses were damaged by the storm, some comepletely flattened. But most families were back in the homes in time for the New Year on 5 February, less than 4 months after the storm.

Various things are impressive – how the Vietnamese are managing to balance state control and entrepreneurial zeal, and the nature of gender equality where women hold their own but also manage to massage men’s ego’s. And the food, the way the country is developing and the confidence and directness of the people make you wish you could have stayed a month and seen more. Vietnam is clean and tidy, as Sujit pointed out, comparing Vietnam favourably with his home in India. And as Alan said, it is also well built. Above all it’s the impression people give of confidence – they’re good at their jobs and know where they’re going.

On the plane home you could watch classic Vietnamese films instead of Hollywood movies. The first “Floating Lives“, directed by Nguyen Phan Quang Binh, begins with a woman being assaulted and chased by a group of women shouting that will serve her right for stealing their husbands. She escapes and lives with a man and his children on a boat in the marshes of the Mekong Delta herding ducks in rice paddies. It’s a sad poignant tale of love withheld that is a final happy ending with father and daughter reconciled and living happily in the village. The film is available on YouTube at Floating Lives (Cash dong bat tan) Full.

The second film I watched is set in the 60s with all the young man in flared trousers. It’s called “Hanoi in the Season of Bird Nesting”, and doesn’t seem to be known in the west because I could find no reference to it on the internet. Again it’s a love story between a young engaged couple caught between traditional family approval and the directives of the state about where young people should live and work. The boy’s father is a high-ranking academic who fought at Dien Bien Phu and who hates corruption and patronage, and the girls mother runs a black market shop and does deals and expects favours. Their young love fades and the boy falls in love and marries the girl’s best friend. What comes across is the tension created by the imposition of communist planning and the effervescent commercial zeal of the Vietnamese.

You can see how this is playing out today in Vietnam with the contradictions created by state control and dynamic market forces. The other thing that comes across strongly is the equal status of young men and women and the traditional values of the older generation when women deferred to men. Again you can see this in modern-day Vietnam where women and men are formally awarded equal status based on their talent and ability rather than gender  but where women tend to play a subordinate role in the hierarchy. Nevertheless it is refreshingly egalitarian and as gender equal as Britain.

In all the films, including “The Quiet American”, the women are sensitive, beautiful, elegant and devoted and the men screw things up by their arrogance, ideals, ambition and lack of charity. There are stark differences in lifestyle between the four films in terms of how well off the families are and what possessions they have. Yet the women in all the films somehow create elegance and tranquillity in their homes with plants, flowers, neatness, tidiness and caring hands that the men seem to undermine with their boorish ways.

The countryside is so different from Europe and the UK. It’s farmed and used obviously but it isn’t manicured. It’s clean, in the sense that there is no litter or destruction, but the uncultivated parts are untamed. The Vietnamese are generally slim and fit looking and the women, in their simple trousers and blouse or longer traditional dress are elegant; elegant in the every day tasks are washing, folding bedding, dressing and serving food.

You see so little of life in Vietnam on a short visit like this visit and have a thirst to know more. And you can see how young Frenchman and young Americans in their turn fell in love with Vietnam and beautiful young Vietnamese women. Graham Greene gives a line to Fowler, the journalist, in The Quiet American, played by Michael Caine – ‘You get to know a lot about Vietnam in the first few days, the rest you have to learn by living it’. 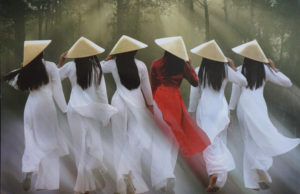