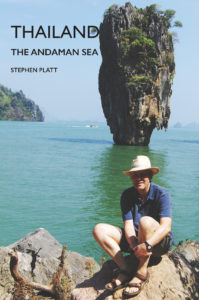 Bangkok is hot and steamy, like a concrete jungle. We had two or three days of presentations, meetings and interviews with relevant officials and academics and got to see the life on the streets and canals.

We then spent a week in Ban Nam Khem, a fishing village on the west coast that had been badly damaged by the tsunami. We talked to lots of villagers and community leaders, conducted a ‘Views’ Google StreetMap type survey of all the buildings and a household survey of residents.

Each morning, before anyone was awake, I would go down from my hotel room and swim in the milk smooth Andaman Sea just as the sun was beginning to rise and then after an hour go and join the others for breakfast