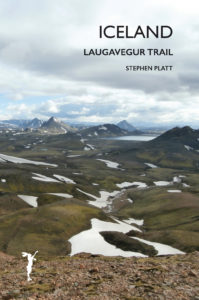 The Laugavegur is one of the big walks. It is the most famous trek in Iceland and crosses harsh and spectacularly beautiful other worldly landscapes formed by recent volcanos and earthquakes. The way I did it, from north to south, is the most popular way. It runs 54km from Landmannalauger to Thórsmörk. From here to Skógar on the coast over the Fimmvörduháls Pass adds a further 25km. and a sharp ascent and descent. It typically takes 6 days to do both sections, but I only had 4 days, having tacked the trek onto the end of a conference in Reykjavik. So I planned to do only the first part. In fact, despite being one of the first people on the trail that season, I managed to do it all. 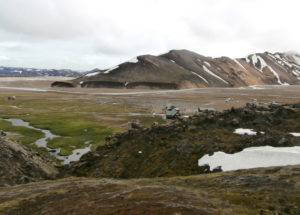 Landmannalaugar at the start of the 4 day walk

The trail is normally open from late June to mid-August. I started on the 15 June, the first day the Reykjavik Excursions bus ran to Landmannalaugar and the first day the huts opened. I hadn’t booked the huts as I didn’t know whether I’d make it. So I took camping gear. From long experience I travel light so my Norwegian tent weighed only 960gm. But I also carried mainly fresh food.

The scenery is sensational and unlike anywhere I’d been before. At this time of the year there is still a lot of snow – a least 8km on the first day Landmannalaugar to Alftavatn and a similar amount over the Fimmvörduháls Pass. The walk is tough, but not excessively so. I was alone much of the time, having started early in the year and setting out each morining before others were awake. There were three river crossings that were in flood because of the glacial melt water and rain, and I needed to strip and take care not to fall.

You pass through vivid rhyolite mountains, climb snow slopes, cross ash deserts deep rift canyons and glacial streams. Where there is vegetation there are wild flowers, Sweet Birch (Reynir) and bird song; on the tundra, the mournful cries of redshank and ptarmigan. I went well, my legs worked and I managed the whole trek from Landmannalaugar to Skogar in 4 days including the bus trips at either end. 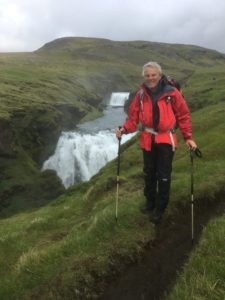 Skógar 3 days later at the end