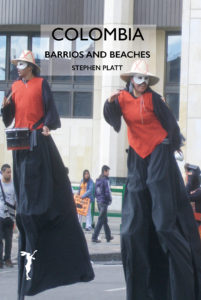 I first met Maria Ximena when she talked about Cazuca, a poor barrio or neighnourhood to the south west of Bogota. The aim was to involve architectural students in an architectural project that would improve the lives of the residents. She described how she was working with the women household heads of the barrio that she’d met through the Fundación de Mujeres, a women’s organisation. We went on to write a book together entitled Cazuca: de lo informal al majoramiento integral.

I spent a few days in Cartagena de las Indias found in 1533, staying in Getsemaní, south of the ancient walled fortress, once a centre for drugs and crime, that has become Cartagena’s hippest neighborhood. I went on to Santa Marta, Valledupar and the Tayrona National Park. I had been wanting to meet and talk to the Kogi, an indigenous pre-Colombian civilazation, descendents of the Tairona civilization, living in the Sierra Nevada de Santa Marta, since I’d seen a documentary about them. The Kogi see the Earth as a living being that our actions are weakening her and leading to the destruction of humanity. They believe their mountain is the heart of the world and they are the elder brothers who care for it.