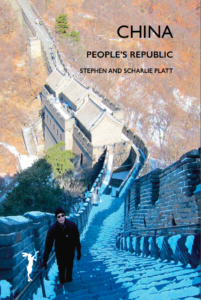 Your details will not be given to others

China was a culturally sensational trip.  Yet we only scratched the surface of this ancient empire and ultra modern People’s Republic. We also visited Shanghai, Hangzhou and Beijing. China is vast and complex. China is the world’s most populous country, the second largest in land area, with nearly 300 living languages and 7 mega cities with over 10 million inhabitants.

We went on our way back from Australia and visited two ex post grad architecural students, Wendy in Hangzhou and Yingying in Beijing.

In Shanghai glimpsed Britain’s imperial past in the Art Deco architecture. We popped into the i Fairmont Peace Hotel (formerly Shanghai Cathay), and strolled along the Bund and Nanjing Street in the pale winter sunshine. In Hangzhou we spent a day in the rain on West Lake. And We had our photo taken on ‘the most romantic bridge in China’, the Duan Bridge.

The high points of the trip were the Great Wall, Summer Palace, Forbidden City and Temple of Heaven in Beijing. We loved trying new tastes and learning about life in modern China.

Steve had been invited to give a lecture in Tsinghua University by Yinying, a PhD student he supervised. We also had a meeting with her boss, Professor Yin Zhi, President of the Urban Planning & Design Institute of Tsinghua University.  Before we left he presented us with a scroll of his calligraphy.

Finally our brief visit made us realise that however often one returned, China would be new and fascinating.