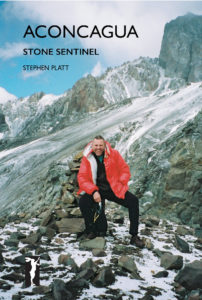 Aconcagua at nearly 7,000 metres is the highest mountain outside Asia From the south it is a hard, dangerous climb. From the north, given good weather, it is relatively easy. In my twenties I read a book about three Polish climbers who in 1934 made their own equipment and climbed it by a new elegant route up the east ridge. It captured my imagination. Over thirty years later I asked a friend to come with me. He pulled out and I found a trekking company on the Internet and booked. 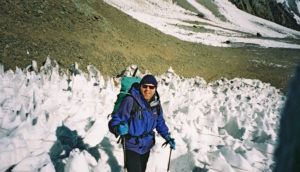 Our approach was from the east and north by the Valle de las Vacas which was much more pleasant than via Plaza de Mulas in the south. The climb took just over two weeks and, apart from the last day when you go for the summit, you have to climb to each camp twice to acclimatise, taking gear up the first day and moving the tents and sleeping kit the second. Although it was an organised trip I felt I climbed it in good style. But despite my best efforts I was unable to pesuade the guides to climb the Polish Route. 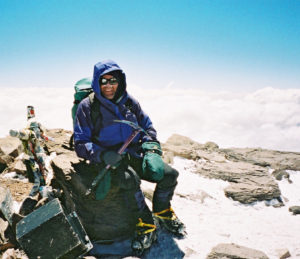 “We had been told the climb would take six to ten hours and we had done it in seven. So we were fairly fast. There is a small cross on the top and a metal box with a visitors’ book. I use Mike’s satellite ‘phone for the first time and telephone Scharlie. The line is fantastically good and she is thrilled to hear I’d made it.”